DEKALB CO., Ind. (ADAMS) – DeKalb County Officials say a Fort Wayne man was hospitalized after being struck by a car on his bicycle Tuesday evening.

According to a press release, the driver of a Chevy Malibu was headed north in the 4900 block of County Road 23 when he failed to see the bicyclist also heading north in the right lane.

The crash caused front end damage to the car and extensive damage to the bicycle. The bicyclist, Joshua Milliman, 44, was taken to a hospital after complaining of back pain.

The DeKalb County Sheriff’s Department was assisted by the Auburn Fire Department and DeKalb EMS. 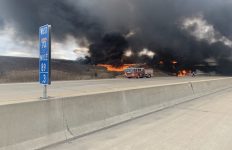