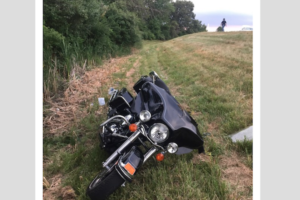 CROWN POINT, Ind. (ADAMS) – Indiana State Police say a motorcycle driver is dead after a crash in Crown Point. ISP officials say that Wednesday evening, at approximately 6:20 p.m., the motorcycle was involved in a crash on I-65 on the southbound ramp from U.S. 231 (Ramp 247).
Preliminary investigation by Trooper Rachel Dykstra showed that a black 2005 Harley Davidson was southbound on the ramp when for unknown reasons the vehicle left the roadway and drove into the west ditch where it overturned.
A good Samaritan stopped and observed the motorcycle laying on top of the rider, however, he was unable to lift the motorcycle off of the rider until help arrived.

Once Trooper Dykstra arrived and was able to help free the driver from under the cycle, she began to administer CPR. Medical personnel arrived on the scene and transported the driver to St. Anthony’s Hospital in Crown Point. The rider was later pronounced deceased by the Lake County Coroner. Notification of the deceased has been made, however, that information will be released by the coroner’s office.

Assisting at the scene was the Crown Point Fire/EMS and Samson’s Towing.

Gov. Holcomb announces next round of school bus safety patrols→