LAKE CO., Ind. (ADAMS) – Indiana State Police say a teenager was killed in a crash early Monday morning. ISP officials say that at approximately 2:50 a.m., the Indiana State Police Regional Dispatch Center received a 911 call of a car vs. deer crash on I-65 northbound at the 246 mile-marker. A few minutes later, that car was struck by another northbound vehicle. As a result of that second crash, a 14-year-old juvenile was killed.

Preliminary investigation by Trooper William Stancy revealed that a blue 2007 Honda Fit, driven by Willy C. Albert, 42, of Union, OH, was traveling northbound when a deer ran onto the roadway. A head-on collision occurred between the deer and the Honda. After striking the deer, the Honda drove into the median guardrail where it sustained additional damage before coming to a final rest in the far left lane. 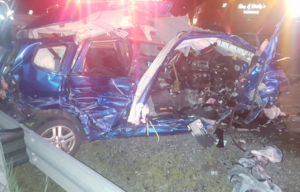 Moments later, a silver 2019 Infiniti QX80 was northbound in the left lane and struck the disabled Honda on the passenger side. This impact caused the Honda to spin several times back into the median. The Infiniti overturned onto its passenger side, rolled back onto its wheels and struck the guardrail head-on.

Indiana State Police released the following along with the press release on the crash:

“As a result of the crash between the two vehicles, a 14-year-old passenger in the Honda was ejected. Trooper Stancy attempted to perform CPR on the child but she was pronounced deceased by the Lake County Coroner. Mr. Albert was transported to St. Anthony’s Hospital in Crown Point for treatment of non-life-threatening injuries. The driver of the Infiniti, William L. Cromwell, 46, of Cincinnati, OH, refused medical treatment. Alcohol is not believed to have been a factor in the crash. Criminal charges may be filed following a review of the report by the Lake County Prosecutor’s Office.

Gov. Holcomb announces next round of school bus safety patrols→