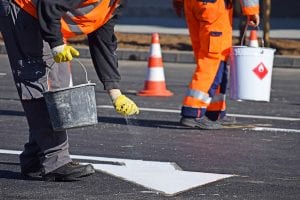 Deputy Mayor Karl Bandemer and Public Works Division leaders joined other elected officials and neighborhood advocates to highlight the Ludwig Road relocation project, which was one of the major investments this year.

The Ludwig Road project was a coordinated effort between the City of Fort Wayne, Indiana Department of Transportation (INDOT) and area property owners to improve safety, provide better access and enhance pedestrian connectivity. The construction investment of this portion of the project was $4.9 million with INDOT participating with a $2.2 million share. INDOT has also invested in improving Coldwater Road and the I-69 northbound ramp.

The City released the following on Wednesday:

In addition to this project, all four quadrants of the City saw enhancements through investments that included sidewalks, street lighting, concrete street reconstruction, asphalt resurfacing, chip and seal, trails, alleys and bridges.

*Approximately 3 miles of asphalt overlay of chip and seal streets

In 2017, the City Administration and a majority of City Council members came together to provide additional funding for alley work and sidewalks in neighborhoods. At that time, City Councilmen Dr. John Crawford, Tom Didier, Tom Freistroffer, Glynn Hines, Geoff Paddock and Michael Barranda voted in favor of an income tax plan to provide additional revenues for needed neighborhood infrastructure enhancements and future phases of riverfront development.

There are 142 miles of alleys throughout the city. Since 2017, the City of Fort Wayne has invested in the reconstruction/rehabilitation of the following alleys:

There are also 37 miles of gravel alleys that are regraded every year and the remaining 22 miles are paper/unimproved alleys.

Historically, alleys didn’t receive the level of investment roads and streets received due to the low volume of traffic served by alleys. With limited resources, municipalities have had to prioritize investments in roads and streets that serviced thousands of vehicles per day rather than alleys which may only serve the few homes that have frontage along them. Before 2017, asphalt and concrete alleys were patched as needed, gravel alleys were graded every year, and chip and seal alleys were given a chip seal treatment every few years. All of the work was usually performed by the Street Department based on alley ratings.

During the last few years, the efforts of the Public Works Division have been primarily focused on reconstructing original concrete alleys, based on their PASER (Pavement Surface Evaluation & Rating) ratings. Brick alleys are replaced with brick and contractors typically perform the work. Many of the brick alleys are historic and are protected by City Ordinance G-11-05-03, enacted to protect the integrity of historic brick streets. The brick must be replaced with salvaged brick and not newly manufactured bricks, per the ordinance. The City of Fort Wayne currently maintains a stockpile of historic paver bricks that have been unearthed from other street projects, as well as purchased from other communities.

Due to the number of alleys that are in very poor and poor condition, the Public Works Division has been prioritizing alleys that serve higher traffic volumes, such as businesses and parking lots, over alleys that serve a small number of households. However, the goal is to get all alleys addressed over time.

More information about bridge improvements
In November of 2017, Allen County transferred the maintenance of all 95 bridges within the City limits to the City of Fort Wayne. This included four bridges that the County had under contract to design: the Edsall Ave. Bridge over the Norfolk Southern Railroad, the Stonehenge Blvd. Bridge in Canterbury Green, the East State Blvd. Bridge over the Bullerman Drain and the Van Buren St. Bridge over the St. Marys River. The city’s Public Works Division promptly transferred the engineering contracts from the County to the City and proceeded to move forward with design, and eventually construction, of these bridges.

The City of Fort Wayne Engineers office, headed by Patrick Zaharako, City Engineer, assisted by the Assistant City Engineer, oversees bridge maintenance responsibilities. They have created a maintenance program to extend the life of the bridges. This program includes the following elements:

Preventative Maintenance
Annual deck cleaning of 80 bridges to remove all dirt, grit, and debris to minimize standing water on the bridge deck. This not only helps prolong the bridge life, it is also aesthetically pleasing and prevents clogging of the storm drains on the bridge.
Annual deck sealing of approximately 15 bridges to minimize salt intrusions into deck which reduces deterioration from corrosion, thereby extending deck life by 5-10 years.

Routine Maintenance
Deck drain cleaning to remove debris and sediment from the drains so that water drains quicker and does not stand on the bridge deck.
Foliage removal and undergrowth spraying to minimize deck shading so that they dry as quickly as possible.
Replacing rip-rap on the bridge ends to prevent erosion around the bridges and minimize undergrowth.
Inspecting all 95 bridges twice a year.
More information about sidewalk improvements

The City of Fort Wayne currently has approximately 1,581 miles of sidewalk. Most of these sidewalks are along residential streets and neighborhoods. Unfortunately, many of our major thoroughfares do not have sidewalks on either side. These major thoroughfares connect activity centers such as schools, libraries and other public facilities, neighborhoods and shopping centers. With no sidewalk connecting them, the only way to get to them is by motor vehicle, which makes our streets busier with vehicular traffic for short distance trips.

In 2017, Fort Wayne Community Schools (FWCS) identified approximately 72 miles of sidewalk connections to students who lived within ½ mile of an elementary school and 1 mile of a middle school. This was due to reductions in property taxes that resulted in reduced bus transportation for school children.

With the implementation of the increase to the Local Income Tax in 2017, a dedicated revenue source was created for new sidewalk construction as well as repair of existing sidewalk. Prior to the creation of this revenue source, the only new sidewalk that was constructed was with new roadway projects that included sidewalk as part of the design. Prioritization of these projects were typically to address vehicular capacity issues. Repair of existing sidewalk was done by petition and cost share with adjacent property owners.

Since 2017, the focus has been on building new sidewalk where none exists in areas that have been identified as priorities by FWCS and also by the Walk Fort Wayne plan. Sidewalk is also included whenever a new roadway design project is being developed. The City is focused on eliminating those vehicular trips of ½ mile or less that can be taken on foot via sidewalk and creating a more active transportation network. This goal is also intended to decrease unnecessary vehicular traffic on our streets and reduce vehicular capacity that is not needed. Since 2017, we have built 15 miles of new sidewalk as standalone projects.

Areas where known ADA needs exist.
Areas that service a park, school, library or other public space (high pedestrian traffic areas). We will start with the immediate perimeter of the areas surrounding these facilities, and as we get caught up with them, move out a block at a time.
Areas that are served by public transit.

We currently use several methods to address them as follows:

Complete removal and replacement
Trip hazard elimination – involves horizontal sawing or grinding of sidewalk that has heaved by no more than 1½ inches
Levelling – involves resetting slabs that are still intact (no cracks or damage) but have sunk due to settlement or been heaved due tree roots
While items 2 and 3 above are funded 100% with City funds, we use the following mechanisms to fund sidewalk projects where complete removal and replacement is needed:

Fully funded by City
50/50 cost share
Included with adjacent roadway projects
The cost share program is the most viable option for getting sidewalk fixed sooner than later if you do not fall within the parameters described above to prioritize sidewalk repairs. This program helps us leverage limited public funds with private contributions. Cost share can be accomplished in a multitude of ways as follows:

Property owner pays the full cost share amount.
Neighborhood association can pay the cost share amount.
Property owners can use Barret Law to pay the cost share amount. This is a low interest (3%) loan that can be paid over a period of up to 20 years. If unpaid, it would go against a lien on the property.
Looking ahead to 2023, residents and businesses will see a continuation of the City’s commitment to neighborhood infrastructure projects with a planned record investment of $48.3 million, which includes $39.5 million for streets/roads/bridges, $6.4 million for sidewalks and alleys, and $2.4 million for trails. Since 2014, the City has invested more than $250 million in neighborhood infrastructure enhancements.

“I’m encouraged by the ongoing progress we’re making to enhance neighborhood infrastructure throughout Fort Wayne,” said Mayor Tom Henry. “Neighborhoods are the backbone of our community and it’s critical to invest in this valuable resource. We recognize that strong and vibrant neighborhoods help position us as a quality of life and economic development leader.”